WHAT GOES AROUND, STOPS.

ANOTHER SCORE AT THE DUMP, when I snagged these folk art critters in the recycling shed. "Every home needs a partially-plucked dusty duck and an only slightly chapped chicken," my Grandma would always say. 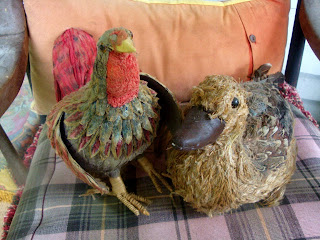 Seems that all my inanimate objects are wounded but rescued. I like that.

I've also saved a one-legged milking stool, only missing its one leg, but it serves perfectly as a fine platter....

A vintage 8-track player.  As an 8-track player, it makes an excellent plant stand, but one more generation and I'll clean up with it on Ebay....

A chipped thingamawhatzit that I choose to use as a whizzamadingie....

And, my favorite:  One of my own books (signed & dedicated, so I know who didn't think I was good enough for Ebay, or they cleaned out their apartment and it was either me or the thing I'll end up with the next time they move).

SO, THERE I WAS AT THE JUDYBLOOM GARDEN, taking a pic of her final resting place favorites (astilbe), when I felt a warm sensation going up my leg. "Judy...is that you?" I thought, startled, on the edge of an epiphany. "Thank you, lovely lady, for this beautiful garden!"

Then, I looked down. It was the usually aloof Thomas the neighbor cat. Still...I think she sent him, knowing how much I love punchlines in the mystic. 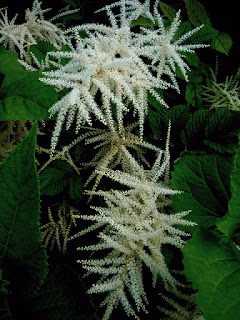 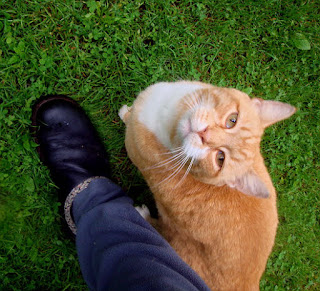 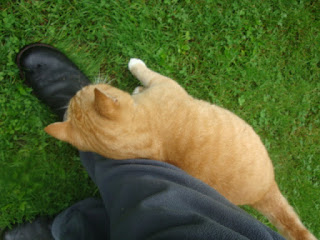 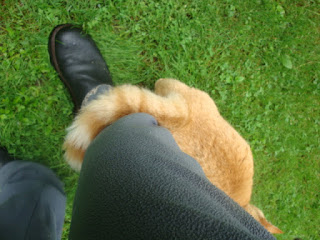 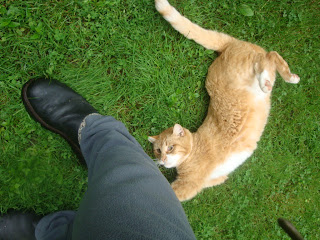 ARE WE BLUE, ELVIS?

SCIENTISTS TODAY have announced that all of us with blue eyes have one single common ancestor. Okay, I'm sending out invitations to Bob Dylan, Gregg Allman, Peter O'Toole, Ellen DeGeneres, Renee Zellweger, Judy Collins, Lawrence O'Donnell and Ringo Starr for the Sherman family picnic this summer.

We can all jam, get drunk, and tell lies about Uncle Elvis. 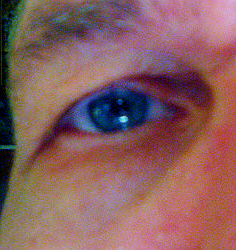 "WALK TALL AND CARRY A BIG WATERING CAN" --- New book! 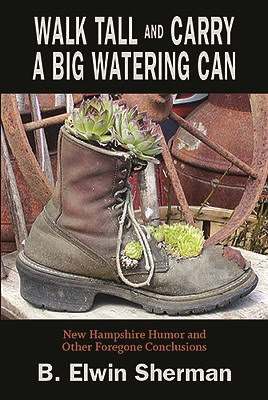 From Plaidswede Publishing Company and its New England Columnist Series, this collection by New Hampshire humorist B. Elwin Sherman is subtitled, New Hampshire Humor and Other Foregone Conclusions.
What do women umpires, men in tubs, radioactive cereals, puppy shampoos, unborn grandchildren, heart attacks, a pounce of cats, frost heaves, Bill Gates, Barack Obama, bad diets, chainsaw etiquette, family vacations, flying pigs and bicycle tossing have in common?
Don't be caught short the next time someone asks you that at a party.  Click on photo or   ORDER HERE!

HAPPY FATHERS DAY to all the top Pops in the group. In loving memory of Alger Sherman, 1924-1972. Jazz musician, piano tuner, teaching me that harmony and discordance are joined at the hip. 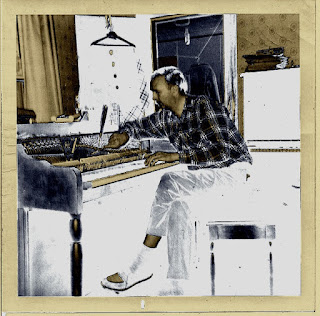 NO NEWS IS BETTER NEWS 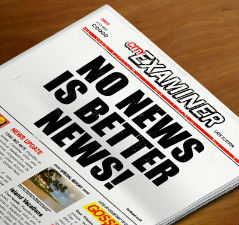 Minnesota Fats once said: “I don’t have to exaggerate; ain’t noboby gonna believe it, anyhow.”
Because there are so many “satirical” news sites out there spoofing the news, and because so much of today’s real news presents as too strange or outrageous to be true, it’s made this humor columnist’s lot nearly impossible. It’s hard to make something serious funny (my job), when it’s already funny without any help from me.
We’re all going lickety-split down the information highway with so many ways to receive and share information these days, but I’m not sure that I always want to know everything that’s going on out there every minute. Yes, I do enjoy keeping up with what’s happening in the world hither and yon, but there are times I regret turning on this social network or tuning in to that news media.
Take today, for example. Here are some newsbits that I could’ve lived without.  Unfortunately, now, neither can’t you.
Ready?
“Kindergarten Graduation Brawl Breaks Out In Cleveland.”
(I warned you.)
Yes, it seems that some fruit punch was spilled near the dais during the ceremony, and this prompted a melee. We can only be comforted, according to Cleveland’s police Commander Wayne Drummond, that “you had adults fighting adults, juvies fighting juvies, and so forth.”
That’s a relief. At first glance, I imagined that a flash mob of Nerfbat-wielding tots had suddenly run amok against their parental units in a Lilliputian frenzy. Before it was over, there were multiple arrests made for “aggravated rioting” (can you have an unaggravated riot?), and ten police cars were dispatched to the scene. City Councilman Jeff Johnson said that it was “embarrassing that parents during a kindergarten promotion cannot control themselves.”
Embarrassing?
No.  Embarrassing is when, with everyone inside watching, we repeatedly push on a convenience store door that says pull. But, hurling punch and punches at your child’s first cap and gowning goes beyond feeling red-faced, and when the Great Cleveland PTA Tumult inevitably erupts this fall, we’d rather not know about it. Next up:
“Loose Llama Subdued With Taser.”
I suppose it had to come to this eventually, and it did recently in Tallahassee, Florida. The runaway llama’s name was “Scooter” (that should’ve been a tip-off right there), and it took six police officers to run him down, zap him, and bring him to justice.
He was tasered because “llamas don’t respond well to voice commands,” said police Lt. Tony Drzewiecki.
I didn’t need that last bit of information, because even though I’m now armed with it, I know that I’ll still instinctively yell “Get out of here, you crazy llama!” if a llama on the lam shows up in my vegetable garden.
BONUS NEWS:  As I read the above story, another one appeared, and we can only hope they’re not related. I’m not kidding: “Four Llamas Involved In I-75 Car Crash.” Now, were they driving? Were they drunk? I don’t know, because I had to stop reading. I’m not sure that I could’ve handled tasered and breathalyzed llamas on the same day.
I was hoping that further research wouldn’t produce more items that you didn’t want or need to know, but alas, they kept on coming. I’m confident that you’d have otherwise been just fine today without discovering that the town of Wildwood, New Jersey is preparing to pass a “Saggy Pants Ban” on its boardwalks, unless you’re including Wildwood in your summer vacation getaway plans. If you are, tighten your belts.
Or, I’m sure that your daily routine would’ve gone on unchecked if you’d gone on uninformed about a young man who has just been declared “The World’s Fastest Clapper,” slapping his hands together 802 times in one minute. I watched the video (no sacrifice too great for this readership) and that’s a minute of my life I’ll never get back, but you’re welcome.
Lastly, I’ve no doubt that you’d have had a hunky-dory day without now being aware that 566 Sears employees recently set a Guinness world record for being “The Most People Assembled In One Place Dressed As Superman.”
Look! Up in the sky! It’s a bird! It’s a plane! It’s a wonder that Sears was open for business!
And, it’s something we wish we didn’t know.


Senior Wire News Service syndicated humor columnist B. Elwin Sherman writes from Bethlehem, NH, as if you didn’t need to know that. Copyright 2013, all rights reserved. Used here with permission.
Posted by B. Elwin Sherman at Thursday, June 13, 2013 No comments: 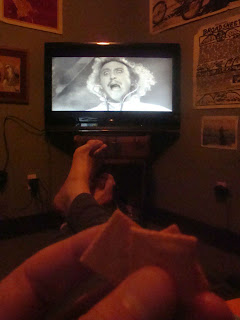 For Judy.
She loved these. 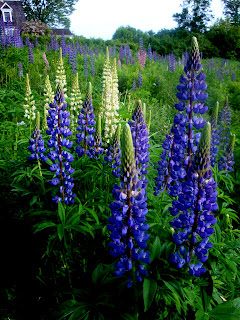 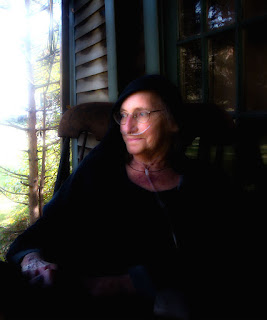 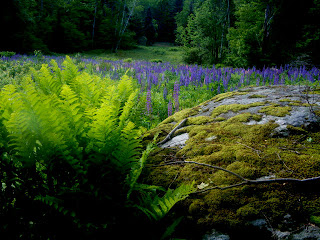 SO, THE NATIONAL SECURITY AGENCY, turns out, has been monitoring my phone calls for some time now? I'm imagining and pitying the bottom level agent sitting in a windowless room, thwacking his head and questioning his own existence after suffering through 30 minutes of listening to me being put on hold 5 times and arguing with the utility company about a billing error.

Have at it, Uncle Sam. 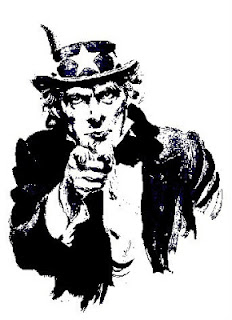 (CONFIDENTIAL TO THE NSA:  When you get to that recorded phone conversation I had with a friend where I was talking about a "hostile takeover" and the "ugly fuzz", I was referring to a 3-month old eggplant Parmesan leftover in my refrigerator that I forgot was there, not the government and the police. Have a nice day.)
Posted by B. Elwin Sherman at Thursday, June 06, 2013 No comments: