A WHIFF OF CHRISTMAS PAST 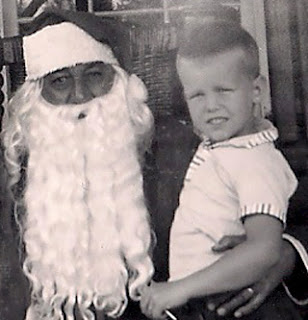 YOUR HOST, age 5, at Santa's Village with the Big Elf Himself. I'll never forget his merry dimples, his rosy cheeks, his cherry nose, his jolly old laugh ... and my first big whiff of whiskey breath.

Merry & Happy whatever it is you do out there, and THANK YOU to all my readers and friends for being there this year.
Posted by B. Elwin Sherman at Tuesday, December 25, 2012 No comments:

DEAR SANTA: I KNOW that First Responders could use a good laugh about now, but PLEASE, as a personal favor, if you've put me on the naughty list this year, don't let me be caught dead shoveling. Drown me in the tub and dip me in jimmies if you must, but don't let me be discovered like this. 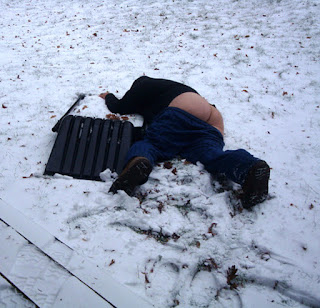 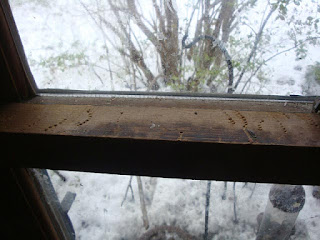 By B. Elwin Sherman

Gun control. Let’s straighten this out:
I have a big loaded gun. I don’t have a license or permit for it. Neither is required where I live, unless I want to carry it concealed while on foot, or loaded, concealed or not, in a vehicle.
There has been one time since I’ve had my big loaded gun that I’ve come even remotely close to using it on anything that uses lungs to exchange air (thus far, I’ve never felt mortally threatened by an intruding worm or land shark bent on destruction, but if either one makes a move toward me at home, I’m ready. I haven’t considered what I’d do if attacked by a giant centipede while driving, but that’s a risk I’ll assume.).
As a working humorist, danger is my business, and I’ve never wanted to put “mobile big bug self-defense” on the form as the reason why I was applying for a concealed carry permit.
One evening, as my wife Judy and I were busy in opposite ends of the house, I heard a thumping sound.  I had a load of wash going, and I always manage to pack the clothes just off-kilter enough to set the thing a-thumping in the spin cycle.  That’s what I thought I heard.
Until Judy screamed.
To be fair, it was more like a long “Aaaack!” sound: the kind of modified shriek she reserved for domestic crises, like when she discovered that I’d put her favorite white wool sweater in with my cheap dark socks.
But, her next utterance clarified everything: “HONEY!  IT’S A BEAR!”
Even then, my first thought was that she was reacting to something on TV. Judy did this, and it was a behavior I’d always found endearing, though she’d subjected me to a few fits and starts before, when we’d begun watching an Agatha Christie mystery together and I’d drifted off to sleep, only to be jolted awake by her “Aaaack!” when the plot suddenly thickened.
But, this time, when I stood to investigate and looked down the hallway, I saw it. Holy shrunken discolored wool sweater on Miss Marple, Batman. This was serious. A big black bear was coming through the window.
There it was: its head and front paws inside the house, as it was attempting to pull itself over the windowsill (see the claw marks in the photo).
Now we’ve arrived at the issue of gun control.
Most of us claim to know what we’ll do in a perceived life or death scenario. I say “perceived” because sometimes a treasured heirloom wool sweater permanently shrunken to size pre-toddler can feel like life or death for both wearer and shrinker.
But, at that moment, no further perception was necessary. Judy, peeking around the corner, leveled one more “Aaaack!” in the direction of the poised invader, then disappeared when I yelled something at her resembling “GO LOCK YOURSELF IN THE BATHROOM!” It resembled that a lot. She bolted off toward the john with a departing “Aaaack!” for good measure.
I reached for my big loaded gun, which was sitting nearby. I aimed it at the animal and shouted something resembling “SHOOO!” It resembled that exactly.
With my finger on the trigger, my heart in my throat, my wife safely secured in the privy and another colorfast washload thumping away, I was ready to fire. The bear was teetering on the sill. Time stood still, and I knew, then and there, that I would never mistake a hungry bear for an errant appliance again.
I also knew that if I didn’t shoot, and the bear toppled into the house and became trapped, all bets would be off. There’d be no politely showing it the door. Judy might never come out of the bathroom, and I’d never again do another load of mismatched clothes.
Then, simply and suddenly, the bear solved the problem by falling backward out the window and running off. I gave it another “Shooo!” as it crashed over the BBQ grille and into the darkness.  Three well-aimed “Aaaacks!” and two “Shooos!” had taken their cumulative toll, shocked the bear into retreat mode, and Nature had done the rest.
Yes, I would’ve shot the bear. Shot it dead. And, I would’ve felt awful about it. The bear was just doing what bears do: following the trail of sunflower nuts on the ground under the birdfeeder to its source in the bag on the bench inside the house. Still, I’d have dispatched it with my big loaded gun if it had come to that, if for no other reasons than to save my wife and free-up the bathroom.
Now … the issue of gun control?
I don’t know the answer, but I do know that arming bears isn’t it. I know that I controlled my big loaded gun. I know that it was me with the gun, not the gun without me, that didn’t shoot the bear.
I know that ruined laundry is no longer a crisis in this house.

* * * * *
Senior Wire News Service syndicated humor columnist B. Elwin Sherman writes from NH bear country. Copyright 2013 by B. Elwin Sherman. All rights reserved. Used here with permission.
* * * * *
This column and website/blog contents are protected by intellectual property laws, including copyright laws. Electronic or print reproduction, adaptation, or distribution without permission is prohibited. Ordinary internet links to this column at B. Elwin's website may be distributed without written permission.

ALL THIS TALK of the fiscal "cliff," and I'm now seeing where the opposing cliffhangers are dismissing this and calling it a fiscal "curb."  Okay, put up your metaphorical dukes, already.

From now on, I'm calling it the fiscal corner of the postage stamp that you've overlicked and will not stick without glue and you don't have any "catwalk."

Or, the fiscal feeling you get when your checkbook ledger and bank statement are 3 cents off and you've done everything to balance it including Windexing the solar panel on your calculator and it's still off and you're going crazy "gutter."

Or, the fiscal candle wax on your plush carpet that will NEVER come off without taking the nap with it "diving board."

Now, fix the damn thing.
Posted by B. Elwin Sherman at Thursday, December 13, 2012 No comments:

IF I WERE SANTA, here's the message I'd be sending to the fiscal cliffhangers in Congress: 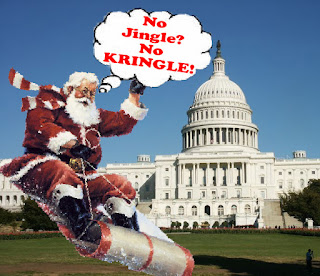 BEAT ME, DADDY, TO THE BAR 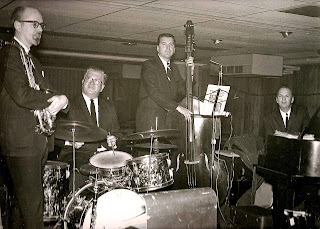 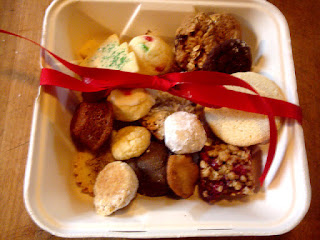 SOMEONE'S LEFT A BOX of Christmas cookies on my stoop. Well, I'm assuming.

They could be Kwanzaa Krispies or Hanukkah Crunchies or Immaculate Confections or Pagan Pastries or Boxing Day Biscuits or just plain December Delights. Whatever they are, whoever you are, and whatever your persuasion ... thank you, kindly.
Posted by B. Elwin Sherman at Saturday, December 08, 2012 No comments:

FIRST FREEZE at Bretzfelder Pond in Bethlehem, NH.  Not Photoshopped; this is strictly Ma Nature's own Cubism. 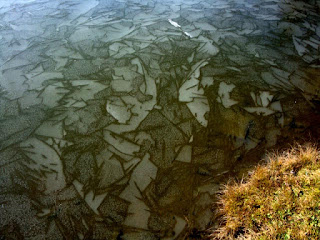 Posted by B. Elwin Sherman at Thursday, December 06, 2012 No comments: