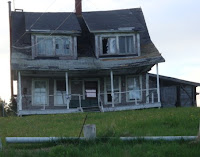 I’m not here to debate changes in the global environment. Let’s just say that this past spring was the first time I can remember riding the Harley in 80-degree weather, and the following week I was mowing the lawn, and the week after that I was shoveling 14 inches of snow.
Not really that unusual for , where “nine months of winter and three months of poor tobogganing” has long been the mantra.
That does bring us to what we won’t debate: the difference between weather and climate. We can all agree that weather is the six inches of partly cloudy in our basements, and climate is when it’s in our attics.
Those of us who began as children and stubbornly refuse to give up those origins, all have stories about the “normal” outdoor seasonal conditions when we were kids. “When I was a kid,” I would say, “the snowbanks were up to the window sills.”
“When you were a kid,” my mother reminded me, “you never came out of the basement.” Funny, because I remember it as the attic.
There was once a TV show called “The Imploders.” For me and my off-season sense of humor, this may have been the most unintentionally hilarious reality program ever produced, as I watched a family of “demolition experts” travel around the country and “bring down buildings.”
They didn’t employ the usual bang-boom application used to pancake an obsolete structure, but rather the “tripping” method. Here, the building is weakened by cutting holes in it, (no one in the crew could agree on how many were needed) tying a cable to it and pulling it over. Simple enough. Right?
The crew chief, whose knowledge of building-pulling was seemingly based on his frat house prank days of attempting to stuff a grand piano into an occupied shower stall, then said to the guy operating the building-puller: “Hey!  If she starts to go, get out of there!”
(Warning: When someone needs to tell or be told this, they might need another year of postsecondary bathroom piano-stuffing before they start knocking down buildings using methods and forces that could … well … knock down a building.)
They used this scientific method of wreckification on an old paper mill near here in the North Country, and we locals were there to watch the spectacle and re-live their attic-dwelling childhood roots.
When the time came, I watched them give it a mighty non-explosive heave and, voila! It shuddered a little and stood there.  Someone, apparently, had forgotten to make the pressure-relieving cuts in the back, and the resulting tug was like trying to raise the Titanic with a Slinky.
This is where I stand with weather forecasters and climate change experts. Their collective expertise alternately tells us that we’re either in for a light sprinkle or a re-enactment of Noah’s maiden voyage. This usually translates as a foot of snow.
Who should we believe? Should we entrust our Icelandic retirement plans to an “expert” who says things like “inter-glacial warmth is driven by orbital mechanics”? Or, should we accept that if we wait long enough, we’ll be low & dry because of the old salt’s riposte, when asked if it will ever stop raining:
“Always has.”
One scientist says that “we should not stop breathing, even though it would be one of the most immediate steps to slow CO2 emissions.” I do love egghead humor, but I’m not convinced he was trying to be funny.
Or, as the well-seasoned sage would offer, “If you don’t like the weather, wait a minute.”
I think I’m going with the time-tested building destructor’s code: “If she starts to go, get out of there!”
I’m not sure where “there” will be, but if any of us hope to make it from here, we should pack up our umbrellas and our sunscreens and head way up northeast, just south of the western skyline.
Either that, or it’s back to the winterized subterranean attics of long-past summers.

Senior Wire News Service Syndicated Humor Columnist B. Elwin Sherman writes from Bethlehem, NH. He is an author, humorist, agony uncle columnist and poet. His latest book is “THE DIOECIANS – His and Her Love“. Copyright 2018. All rights reserved. Used here with permission.
Posted by B. Elwin Sherman at Tuesday, November 13, 2018 No comments: