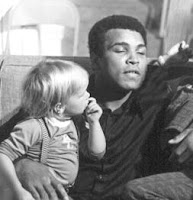 This is another true story, but I want to be clear: that’s not the reason I’m including it.  Not all true stories should be told.  Some, in fact, should be snugged into a shoebox like a long-loved rabbit and buried in the back yard of childhood.
Oh, it’s okay to place its last-nibbled carrot in there alongside it.  It’s okay to do it unceremoniously, alone.  It’s okay to even leave a marker that has temporary lawnmower immunity.  But, a generation later, there should be nothing left for passers-by but a little depression in the ground where the shoebox collapsed.
This isn’t one of those stories.
It happened at one of those rare moments in history, when all the airy tumblers of a single thunderclap fell into place, never to strike just that way, at just that place, ever again.
The world’s then greatest boxer was once invited to receive an honorary degree from a college I was attending. He was renowned for his singular skill in the art of formal human pummeling, but he’d also often demonstrated his virtuosity as an impromptu poet.  That day was no exception:
“I like your school; I like your style, but I don’t like your pay; I won’t be back for a while,” he’d said later at the press conference.  Celebrated dead poets everywhere no doubt turned a little in their graves, but who cared about them.  They were dead.
And, I’d like to see Carl Sandburg rope-a-dope with a stanza, dead or alive.
For my money, “Hog Butcher for the world” could never go the distance with “I can drown the drink of water, and kill a dead tree.  Wait till you see Muhammad Ali.”
I’ll see your Chicago and raise you a lightning-fast jab, Carl.
That morning, my four-year old daughter was with me.  I can’t remember why, except that maybe it was my weekend to have her.  Perhaps it was Liberal Arts Father-Visitor Daughter Day.  Lucky for us, though, it was the same day the world’s greatest rhyming boxer was to receive his publicity sheepskin.
Let’s face it:  giving an honorary college degree to a high-profile notable is a two-way street.  Yes, the honoree is pleased to be post-secondarily validated without ever having to sit through an un-elective, but it also doesn’t hurt the school’s image.
Sometimes, the trustees later voted to stick up a statue near the athletic field.  In my mind, I can’t look at a statue without thinking about a favorite Vincent Price movie, but I might feel differently if it was me standing up there as a pigeon-shit depository.  That’s more than most of us ever achieve.
We arrived early, and I took her hand the best I could as she three-limb pinwheeled alongside me across a large open field to the reception house.  To this day, I wish I’d pinwheeled along with her, but I was too distracted by the fear of having to return a daughter to a mother any less intact than how I’d received her.
I needn’t have worried.  Four-year olds are either indestructible or delicate as a feather, and she’d been delivered to me in full indestructible mode.
Today, I couldn’t do a pinwheel if you stapled me to a windmill.
By the time we reached the reception house, she’d settled down into mere hop-a-long pull-toy mode, and I’d survived.
We went inside, and there, like a stop-motioned bolt of lightning, sat the man.   The room was empty except for him, and he sat slumped on a couch, unmoving, staring at us.  Impossible, but lightning is like that.
He immediately straightened up, smiled broadly and opened his arms toward us.  Toward her.
“Hello, girl!” he said.  I thought my daughter would do the natural thing, having never seen this big dark hulk of a man before, and immediately switch to snake mode around my leg.
Instead, she showed me how much fathers know about such things, and went right over to him in fearless kangaroo mode.
He picked her up and hugged her close as I stood across the room in abandoned lighthouse mode.
He opened his eyes wide in mock surprise and did the sitting version of a complementing pinwheel.  She giggled and bobbled and matched him, twirl for playful twirl.
For my part, ships were going aground on the rocks over there by the dozens, and I couldn’t move.
Soon, other people began entering the room.  Statue-erectors and grown-up dead rabbit internors crowded in -- the usual media blitz – and daughter and I were reduced to those subtle variations that you can never quite find in a picture puzzle.
I retrieved her from his arms like a reinstated lighthouse with a good excuse, no questions asked.  When I moved in close to them, I saw that his face was bruised and swollen from a recent close fight.  I was glad that she was still too caught up in child mode to notice this, or to know why if she had.
He returned her to me like a child alone placing a beloved pet in a shoebox.
Today, forty years later in her life’s back yard, he has passed into the eternal ring, but I hope she still remembers and loves why the ground is shaped like that.