IN THE FOURTH GRADE, I was singled out to perform 'The Little Drummer Boy' in the Christmas play. Took me this long to live and rewrite the tribute:

Come, they told me
doldrum a drum-drums.
A cold malaise there'll be
doldrum a drum-drums.
Our hands and feet will freeze
all numb a numb-numb.
We’ll cough, shiver and sneeze
until we succumb,
to the doldrums,
dumb a dumb-dumb.
Or, we’ll warm our toes
our fingers and thumbs.
We’ll drink umbrella drinks
of butters and rums.
We’ll slurp them down wethinks
and sit on our bums,
bum a bum-bums,
bum a bum-bums.


Shall I pour for you
my rum a rum-rums?
Your butts I'll warm up, too.
Come chum a chum-chums.
We won't care if it's cold
and won't be so glum.
We'll drink 'til winter's old
come spring and then some,
what we become,
Merry Doldrums.

Senior Wire News Service Syndicated Humor Columnist B. Elwin Sherman writes from Bethlehem, NH. He is an author, humorist, agony uncle columnist and poet. His latest book is “THE DIOECIANS –His and Her Love”. You may contact him via his website at Witbones.com. Copyright 2017. All rights reserved. Used here with permission.
Posted by B. Elwin Sherman at Saturday, December 23, 2017 No comments: 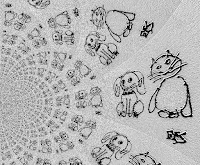 If we were smart, the first thing we’d do every morning is admit how dumb we are.

No, not the kind of dumb my dictionary calls: “a lack of intellectual acuity.” That kind of dumb happens when I don’t bring in the suet birdfeeder at night, and by morning, a herd of bears has trampled the rhododendrons and twisted the feeder post into an iron pretzel.
Dumb.
By the way, when marauding bears collect in a group and savage your birdfeeder (the latter also known as “a squirrel feeder”), the proper animal collective noun is “sloth,” not herd. A sloth of bears. I didn’t know that until researching this column, and that’s the kind of dumb I mean that we need to revel in.
Uninformed. Unenlightened. Unaware.
Not the dumb where you know full well that if you don’t bring in the feeder at night, a passing sloth might flatten the perennials, but you leave it dangling out there anyway, thinking you’ll outsmart Mother Nature. Dumb.
But, I didn’t know until venturing here, that said sloth would deprive the “scurry” of squirrels of their bird food, not to mention the “dissimulation” of birds, specifically the “party” of blue jays. There, now I suspect there’s also at least one fun fact you hadn’t known until just now. You are now less dumb than you were a minute ago, and this may have saved your life.
I claim this because I once had the privilege of tending to the daily needs of an old woman. She was old. I mean the kind of old where if she’d been ten years younger, she’d have looked the same.
In one morning conversation we had as I prepared her breakfast, I told her about the “kneeling moose” I’d seen early this summer (more on this coming up). She listened, smiled and said: “There, now I won’t die today.”  She believed that if she learned at least one new thing every day, she’d live to see the next.
She just recently passed away, probably dying on the day that she felt she’d learned enough. I’ll always have to wonder if she hadn’t known, and might’ve lived another day, if I’d told her that cats can see ghosts, and when two adult felines lie immobile and staring at an empty sofa, that’s a “pounce” of cats probably waiting for the spirit of a visiting dead uncle to yield their favorite cushions.
Thus, “I’m dumb and I’m proud!” might just be the rallying cry to good health and longevity. After this sentence, you’ll feel livelier knowing that when you find what looks like a scattering of thistle seed on your kitchen counter in the morning and the tell-tale nibblings in your fruit bowl, you’ve been invaded by a “mischief” of mice.
Or, when you swerve to avoid that cluster of lumbering characters in the road, your mood will brighten when you realize you had a near-miss with a “prickle” of porcupines.
Or, it just might lower your blood pressure and put a spring in your step, now knowing that when kittens congregate, they do it in a “kindle,” and your neighbor has a new “puddle” of puppies.
Kitten kindles. Puppy puddles. Say those together three times fast and you’ll be sure to live another day.
I don’t know why I’d never known that a moose will drop down on its front knees to eat. I discovered this on a respite to a remote cabin, when I saw one assuming this genuflective feeding posture one late afternoon.
I’ve spent most of my life in moose country, and when I haven’t been swerving to miss that highway prickle, I’ve been preventing sloths from gobbling up suet intended for dissimulating parties but stolen by scurries.
I’d just never seen a kneeling moose. I’ve watched them eating trees (on their feet), stepping over guardrails and swimming across ponds. I knew their antlers could have a six-foot span. I knew they dropped them after mating season and grew new ones in the spring, thus conserving energy for winter (making them smarter than some other dumb animals I know).
I knew they could eat 100 pounds of lily pads a day. I knew that one of them had a cartoon sidekick named Rocky. But, I never knew that moose will kneel down to eat up. Makes perfect sense, of course. On your feet all day and bent over?  Forget kneeling; I’d be lying down to eat, and often am.
But, there’s one dumb animal kingdom enigma which never has been and never will be explained:  One goose?  Two geese.
One moose?  Two … moose. I’ve stopped asking why moose not meese, though I believe it’s forever been an inside joke amongst our founding lexicographers, and I still feel dumb about it.
Lastly, you deserve an extended life bonus just for all this learning: I can tell you that geese are also clumped together according to activity and habitat. Ever see geese in flight?  You’re looking at a “skein” of geese. Geese on the water?  You’ve just spotted a “plump.”  Meanwhile, multiple moose standing, swimming, stampeding or kneeling?  Doesn’t matter. Always a “herd.”
I don’t ever expect to see a herd of kneeling moose, but if one hobbles into view, I’m ready.
Thomas Edison said: “We don’t know a millionth of one percent about anything.”
Now that we’ve learned that, we’ll have lots of tomorrows to figure out what it all means.
----
Senior Wire News Service Syndicated Humor Columnist B. Elwin Sherman writes from Bethlehem, NH. He is an author, humorist, agony uncle columnist and poet. His latest book is “THE DIOECIANS –His and Her Love”. You may contact him via his website at Witbones.com. Copyright 2017. All rights reserved. Used here with permission.

Posted by B. Elwin Sherman at Wednesday, December 13, 2017 No comments:

THE EYES HAVE IT 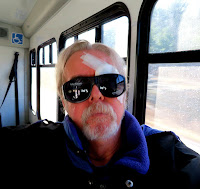 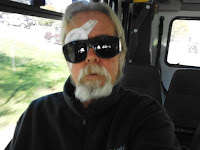 Kudos to Dr. Patrick Morhun and his team at the VA hospital, after my 2nd successful eye surgery.  20-20 vision now, for the first time since boyhood, WITHOUT GLASSES!

Oh ... and to all those long-ago bullies who took great delight in the "four-eyes" chant? Here's your  giant audio-visual raspberry.

Posted by B. Elwin Sherman at Thursday, December 07, 2017 No comments: