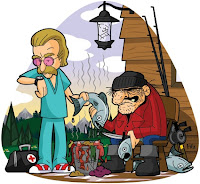 There I was: a New Hampshire traveling male nurse working temporarily in Arizona and visiting Aldo, a brusque, nonagenarian male patient living permanently in a ramshackle house trailer outside Tucson.

A "nonagenarian" is a person who has reached 90-plus years of age. He was brusque because it's impossible to pass nine decades in this life without some crusty in your character, and Aldo was so crusty that if he'd been 10 years older or younger, he'd have looked the same.

We argued all things indigenous to his Grand Canyon State and to my Granite one.They weren't really arguments. One doesn't win arguments with a 94-year old man, not if one is as smart as one thinks one is.

When I arrived he was hunched over on his front porch, sitting on two stacked milk crates, cleaning catfish and dropping the innards into buckets, sorting them by their edible hierarchy. Fish heads here. Fish guts there. Plop. Plop.

My 97-year-old great-grandfather was born and brusquely died in the same Belmont, NH, bed, and spent many of his catfish-cleaning days on such a porch.

Before I checked Aldo's vital signs (which he always thought foolish: "When I'm dead, you'll know it; I'll be paying more attention to you"), I challenged him about his buckets of piecemealed catfish:

"Say, Aldo, whereinheck do you get catfish in a desert? I know where to get them in New Hampshire, but out here?"

"Don't be an idiot," he said, ending the argument.

Fact is, and because he made it clear that I wasn't as smart as I thought I was, there was indeed a nearby desert lake where catfish roamed free, which prompted my next series of losing arguments:

"Well, Aldo, in New Hampshire, when I hike up Mt. Washington, I pass the tree line and come out on top of rocks. Here, when you climb Mt. Lemmon, you go up past rocks and come out in the trees."

"Nature's way," he said, plopping a skin into its designated pail. "Don't be an idiot."

Undaunted, and a little smarter, I pressed on: "I do miss the seasons back home. Out here, it must be hard to tell one from another."

Daunted, and a little dumber, I stopped him and tried one more time:

"Now, wait a minute, Aldo. In New Hampshire we take great pride in our state motto, 'Live Free or Die'. It's not just a slogan for a license plate; it's a way of life."

"How's that?" he asked, glancing at my truck.

"Well, we work hard, our winters are the harsh flipside version of your summers, and we live free."

"You think you're free?" he admonished, wagging the last head of his cut-up catch at my truck. "Try driving back there without that license plate."

* * * * *
Senior Wire News Service syndicated humor columnist B. Elwin Sherman writes from Bethlehem, NH. His new book, “Walk Tall And Carry A BigWatering Can,” is now available.  You may contact him via his blog at witbones.com. Copyright 2015. All rights reserved. Used here with permission.
Posted by B. Elwin Sherman at Friday, November 27, 2015 No comments: 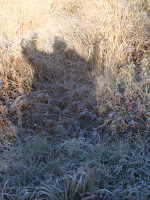 Sharing our shadowy "Knights Who Say 'Ni!'" impression, a Happy Thanksgiving to all.

Ni! Ni! Have a good bird, and send us a frosty shrubbery!