I know you won’t mind the disparaging nickname; this is a favorite vehicle of your hero in the White house: insulting and belittling anyone who won’t get in his lying locksteps. 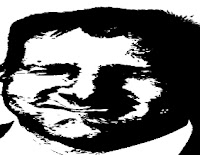 Similarly, I’m sure you’ll appreciate my rendering of your image (I did the same for Trump). When your interior actions are ugly, distorted and deceitful, your exterior should reflect that.)

But, I’m writing re: Your recent comments during a Fox interview:

It’s never a surprise to me when members of your Party favor the interests of the privileged and powerful versus “the little guy” (usually with a degree of meanness that beggars explanation), so the apparent glee you expressed when you told your Fox “interviewer” that you “couldn’t wait” to veto the Paid Family Leave bill … well … that’s par for the course. Mean. Gutless.

Lest you forget (because Me The People won’t): when running for governor, you were asked in a debate if you supported paid family leave, you said “Absolutely.” Liar. (Yes, yes, yes, I’m sure we took your “absolutely” out of context. Bullpuckey. You lied.)

You supported Trump’s pulling us out of Paris Climate Accord. You refused to join other governors in the bipartisan US Climate Alliance. You have visited the Trump White House more than any other governor. Political toady.

And, speaking of guts, I also take great exception to your comment that Donald Trump will win in New Hampshire because he appeals to the voters here “on a gut level.”

Wrong-headed, asinine, and you certainly don’t speak for me.

Yes, I do indeed have a visceral reaction to the criminal who currently occupies our White House, but it’s on a level that reeks of revulsion. As a native Granite Stater, I’m ashamed, embarrassed, and disgusted that you occupy our State House.

It’s stunning to me that anyone who can think critically, or who can think at all, for that matter, supports this lying, despicable wretch we have as a president. This is the most puzzling: clearly you’re not “crazy,” but your actions are. In the end, I don’t make the distinction. Crazy is as crazy does.

As a man, a father, a husband? Do you have no moral compass? No sense of what’s decent, fair and just?

-- As a man, apparently, it’s okay with you to mock the disabled, ridicule the parents of a fallen soldier, dishonor a true American hero’s (John McCain) sacrifice and suffering for his country? You admire a man who said that his struggle to avoid getting a sexually transmitted disease was his "personal Vietnam"? Seriously? That’s beyond insulting. It’s the mark of an arrogant, sniveling coward.

-- As a father, apparently, it’s okay with you to support a degenerate who called his daughter “hot,” and said that if she wasn’t his daughter, he’d be dating her. That doesn’t bother you? Would you say (or even think) such a thing about your own child?

You’re not disturbed that children and babies are wrenched from their parents’ arms --- parents who are desperate for help and who come here hoping to protect those children from certain harm? What is WRONG with you? What are YOU made of?

--And, as a husband, apparently, you’d have no problem if I greeted your wife by grabbing her in the crotch? This is the example you set for your sons? Is that how you want them to grow up in this world? Objectifying and disrespecting and in fact assaulting women like that?

HOW can ANYONE support a Donald Trump without being of this same ilk? In my book, that makes you one sorry human being, and just plain creepy. And THAT, sir, is MY New Hampshire gut level.

In the future, should you elect to seek reelection, I’ll be doing whatever I can to support your opponent and to see that you return to (a disgraced) civilian life.

And, just for some seriocomic aside, I especially liked how gave yourself a $22,000 pay raise the day after you took office. That’s 18% more than your female predecessor. A true Republican.

Even seriously funnier, you’ve claimed that you worked for eight years in California as “an environmental engineer.” Lie. You never earned a professional engineer’s license in any state. You had an EIT (engineer-in-training) certificate. You were a subordinate, supervised employee. Amazing how all you guys make things up.

Perhaps I should say, you don’t lie, it’s just how you take yourselves out of context.

UPDATE: 07/09/2019  Now comes news that at an auction/GOP fundraiser, you jokingly offered a copy of your Paid Family Leave bill veto to the highest bidder, adding that from now on you'll just "veto everything." Good work, Crazy Chris. You think that's funny? All it does it continue to show you up as elitist, ugly, and mean-spirited.

UPDATE: 07/22/2019 In the give-credit where it's due department, I see where you've done the right and true thing by signing SB142, the "period poverty bill," into law. Frankly, I'm shocked, given the fact that nearly every New Hampshire Republican voted against it, and nearly every Democrat for it. Even your words are stupefying.

This bill requires that all public schools provide free menstrual products -- tampons and pads -- to students at no cost.

And, you signed it.

And, you said this: “This legislation is about equality and dignity. SB 142 will help ensure young women in New Hampshire public schools will have the freedom to learn without disruption ― and free of shame, or fear of stigma.”

Almost unbelievable, given your misguided and baffling allegiance to our current misogynistic sexual predator-in-chief, and the fact that almost all your fellow GOP'ers held against it. WHY?  I don't trust your motives, and I'll never understand them. WHY? As I've noted in the above posts, you are all (typically) elitist, ugly, mean-spirited and just plain creepy. WHY?

Veto: A bill that would require a 3-day waiting period before the purchase & delivery of a firearm.
Veto: A bill which closes the so-called gun show loophole and requires background checks for virtually all commercial firearms sales or transfers.
Veto: A bill that prohibits carrying a firearm on school property.

Again, we see who owns you and your Party cohorts (though I really want to mean conspirators).

Next time someone gets a gun who shouldn't have, next time someone shoots up a school, I will personally consider you an accessory to the murder, mayhem and madness that you seem hellbent to perpetuate. You say you want to protect our "individual freedom"?

UPDATE: 09/08/2019  "Sununu Vetoes Bill To Expand Absentee Voting."  Yep, there you go again, And, you are now the vetoing-est Governor in NH history.  You and your Party know that making voting easier and open insures that Democrats will win.  This is how YOU win: You cheat. Lie. Steal. Great parenting skills (of course, your support for the wretched POS in the White House tells us all we need to know about you as a father.) What a sorry legacy to leave: Cheater. Liar. Stealer. Crazy Chris. As a New Hampshirean, I apologize for you every day.

Posted by B. Elwin Sherman at Wednesday, May 29, 2019 No comments: Links to this post